As far as bimbotic adverts go, this one takes the cake. I was flipping through the pages of The Star this Tuesday (13th April 2010) when I chanced upon this advert somewhere in the Metro pages. Staring at me was a bimbotic spokeswoman smiling vacuously and proudly displaying her "assets" as if she were nothing but a walking piece of billboard for breasts. Any woman with an IQ shallow enough to agree to being a spokesperson for such a tacky, trashy and tasteless advert....must surely not be doing herself many favours in the brains department huh? 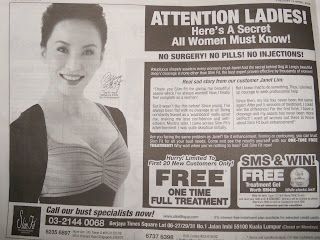 Check out the "real sad story" that bears testimony to some women's unfathomable imbecility... 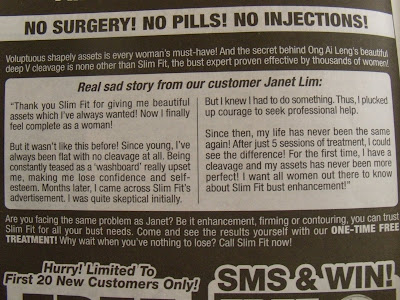 You know what's "real sad" about Janet Lim? That she allowed her breasts be the sum of her entire self worth, self-esteem and confidence. That she could only feel "complete" with 2 newly-enhanced pieces of lipid-filled flesh protruding out of her chest. Pathetic. She needed a therapist more than she needed new breasts. Personally, if anyone had the audacity to comment about my physique (washboard?), I'd like to see him in court with a sexual harassment lawsuit up his behind. Unlike Janet Lim, I would not bend over backwards and spend money to jack up my boobs just to stimulate the excitement of some crude, sociopathic trash. Probably the same kind of trash who wolf-whistles and makes those disgusting sucking noises at women walking by.
It irritates me to no end that society (and yes that includes women too!) places so much premium on women's looks and mammary glands! Enough already with all this push-up bra cleavage nonsense! Women (except maybe for the occasional bimbo) are sentient, intelligent human beings with talents and abilities not even remotely related to how we look. A woman is not the sum of 2 breasts on legs for men/women to ogle at! Get that through to your thick, bimbotic skulls, Janet Lim and Ms Spokeswoman Bimbo of the Year!
Posted by Jessica at 8:30 PM

I don't find busty women look good in anything they wear. Their waist usually look shorter with the big breasts taking up the length of the body.

Usually the breasts are bigger than their head, so not proportionate at all. Maybe, that's the reason why they are not doing themselves many favours in the brains department like you said.

Above said, not include those who born with big breasts. These are natural, and there're God's gift. ;-)